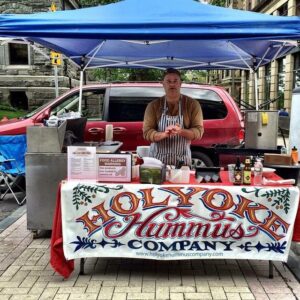 My dear friend John Grossman and his wife Dawn own the Holyoke Hummus Company in Holyoke, Massachusetts. I’ve marveled at how they grew from setting up a small folding table at a local park selling falafel sandwiches to acquiring a cart. Next, they outgrew the cart and bought a food truck. They eventually opened a restaurant.

I appreciate their growth because John tested each stage and grew based on the results.

Don’t get me wrong, it wasn’t easy, and some steps tripped him up, but each stage built on the success of the previous one.

In the early days of the pandemic, restaurants shut down. So, like many others, John made the switch to pick-up or delivery orders. But maintaining a full, sit-down restaurant didn’t make sense financially. [Read our October 2020 story on Holyoke Hummus.]

John adjusted quickly. He moved his food prep operations to a co-kitchen. Then, he partnered with a new cannabis dispensary where he could park his truck and serve. This spot became the new pick-up (and walk-up) location.

It was great. Locals could venture to the truck to grab a bite, and the online delivery orders kept coming.

Of course, that changed when restaurants reopened. Suddenly those pick-up orders slowed down.

Not going back to a restaurant

He stopped his truck service at that location and shifted his focus to his business’s catering and events side. He continued to use his food truck and food trailer, which are far more profitable than the restaurant.

While this was all happening, John hired a food scientist to replicate his hummus recipe for large-batch preparation and eventual supermarket distribution.

From the outside, owning and operating a restaurant has all the indicators of achieving a certain level of success. But, in reaching that point, it might be tempting to hold on to it too long for fear of having to do what feels like a failure or at least take a step backward.

John’s story is different. First, he did what he could to make adjustments and stay put through the pandemic. But when it became clear that wasn’t going to work, he changed his model.

Shift to What Works

The phrase Fail Forward gets used a lot. And while I get that, it seems like that’s what is happening here. But I’m not sure it is.

At its core, the Holyoke Hummus Company makes and sells delicious food. They have a variety of proven methods for getting that food to their customers. And when one of those methods stopped working, John shifted to something else; something that had worked for him before.

And the shift did work until it didn’t. So John shifted to something else that has worked.

We spend so much time worrying about our failures or attempting to mine them for precious lessons.

Maybe we need to change that approach and shift to what works.

Find out about Rob Hatch’s coaching

Rob Hatch is an author and coach for business owners and executives. He brings a unique blend of knowledge and background in the fields of Human Development and business operations. His weekly newsletter is read by tens of thousands of individuals all over the world. He’s the international best-selling author of “Attention! The power of simple decisions in a distracted world” which was named a 2021 Business Book of the Year Finalist.