Angrily, I hit “Send” on the message, certain that I was burning a bridge by doing so, but at this point, I didn’t care.

It was 2015 and I had just spent far too long chasing a deal with a prospective client that went nowhere. Despite literal years of doing favors and having conversations with numerous staff, customers and other interested parties, I had finally gathered enough information to send them a decent proposal, only to receive crickets on the other end. My polite but consistent prodding did not help the situation. I did not get a formal rejection—I got nothing at all. Silence. 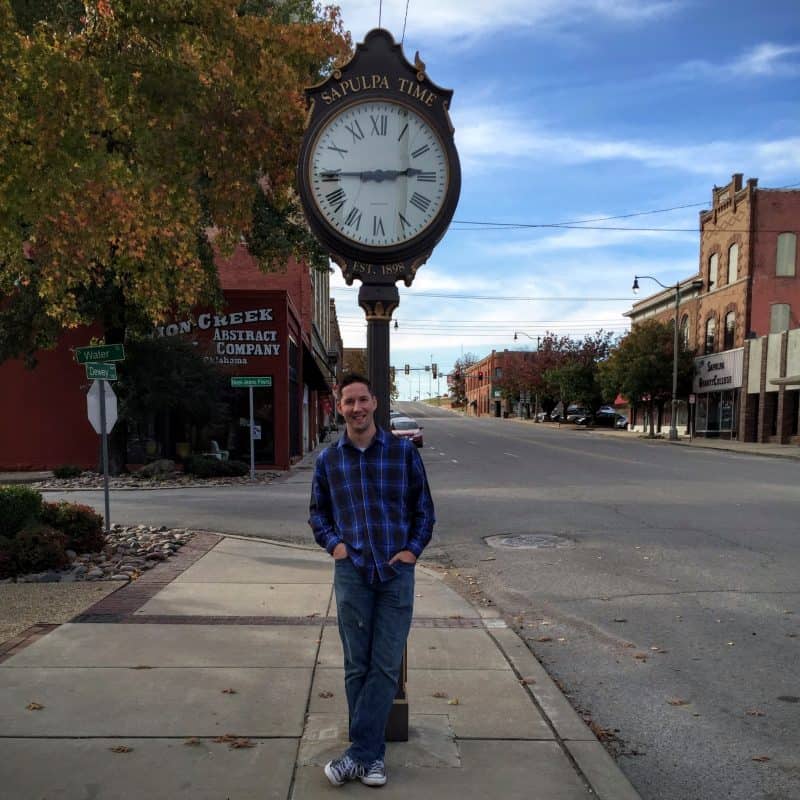 Less than 2 years earlier, I had left a job working for the largest media site in Northeast Oklahoma, where I was doing the best work of my career as a web designer for The Tulsa World. When they were purchased by BH Media in 2013, I made the decision to leave, and we parted ways on great terms.

Even so, I had found at The Tulsa World the intersection of a number of things I loved: The web, design, and journalism. So I eagerly watched for another opportunity to use my skills to do something similar.

In late 2014, the website for my hometown’s local newspaper went down and never came back up. I had been a columnist for them before my days at The Tulsa World, and had kept up a relationship with the folks there, even handling their email administration as a favor to them. The work involved was minimal and I did it purely for the chance to stay in touch.

I emailed the editor and asked for the chance to submit a proposal to give them a brand new website with all the needed functionality to help them provide value to their readers and bring in more revenue. He gave the go-ahead and I got to work. It looked as though those years of doing favors were about to pay off!

Over the next several months, I began having numerous conversations with their staff, their readers and their advertisers. We began exploring what their needs were and how we could use this opportunity to launch them into the digital world in a big way. I met with a team of designers and content producers to ensure that when we did this, we were going to do it really, really well.

Finally, in March of 2015, I had enough to submit a thorough and ready-to-execute proposal. I emailed it over to them and waited with baited breath.

I checked the address. Did I send it to the right person? Yes. I sent a follow-up email a couple days later. Still nothing.

I reached out to my usual proxies. Had the boss seen the email? Was he mulling it over? Was there something he didn’t like? Something we needed to change or work out? They all assured me he had seen the proposal, but nobody could give me an answer on whether or not he wanted to move forward.

As the days and weeks went by I became increasingly frustrated at his silence. Finally, I could tolerate it no longer and sent a message that told him I’d no longer be pursuing the project and wished them the best.

That final click of the Send button was the point at which I decided to wash my hands of them entirely. There would be no more favors. No more trying to help those that wouldn’t be helped.

But the problem remained: there was no longer an online news presence for the local folks. I really felt an obligation to the community to inform them of what was happening around town, as well as share their stories. So I began to look for another opportunity.

That very day, I turned to a man who had started a Facebook Page writing those types of stories. He was a veteran journalist and publisher who was using his retirement to write feature stories on the happenings in Sapulpa, as well as repost other news and events that folks sent his way.

I asked him if he’d be up for writing his stories for a website so they could be archived and shared around and searched for. He was extremely responsive, and I met him just a little while later to get the details ironed out.

By the way, that conversation? A whole 90 seconds.

Later that summer, he came to me and asked if I’d be willing to run the show on this little adventure we were starting. He was retired, and didn’t want to deal with the headaches of running a news organization, even if it was online-only. I agreed and again, got to work.

A short while later, SapulpaTimes.com was born on August 26th, 2015. There’s been a lot of love and dedication to this project, and a year and a half later, a lot of great things have come out of it:

And we are still progressing on this journey! We all take a great deal of satisfaction in seeing our work published to a grateful community. We continue to find new ways to serve, and have a roadmap to carry us for quite awhile. 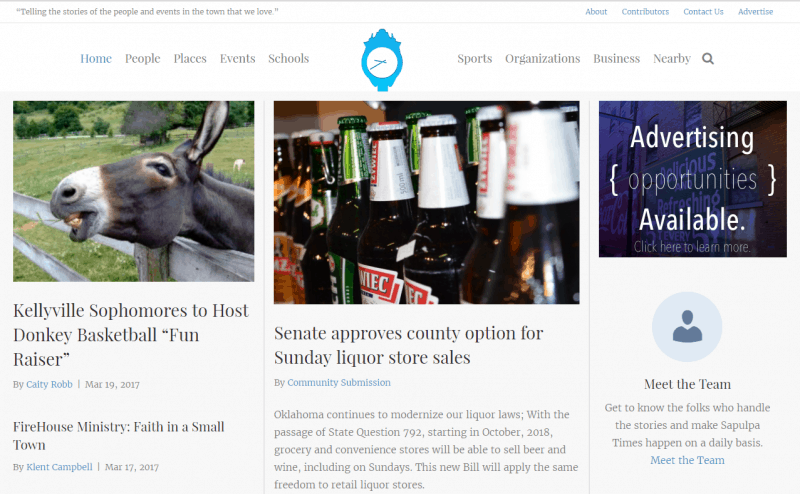 There are a number of lessons that have been learned in the last couple of years on this venture, some a little harder-learned than others. If you’re looking to find a way to make your passion happen in a way that it will benefit your town, here are a few things to bear in mind.

Look for a way to fill a need that your town already has. This whole ordeal would never have worked as well or as quickly if there hadn’t been a vacuum in the area of online news for my community. With so many directions that I could’ve gone with my skills as web designer and developer, creating Sapulpa Times was the one that made the most sense, and what I was most excited about. Try to find a way to fill a real need that your town has, and once you’ve found it…

Use what you know and what you have. In the world I live in of software engineering, there’s an adage most developers live by: “Shipped is better than perfect.” This means that getting the product finished and out the door is more important than getting it absolutely flawless. Too many people I know are waiting to get all their ducks in a row before they can get started. I’m telling you that if you’re trying to wait for all the conditions to be right, you’re never going to get there! Start now, use what you know and learn what you don’t!

Create and document the processes as early as possible. As you begin to explore this new-fangled idea that your community seems to resonate with, you’re going to find something that you do more than once. Maybe it’s emailing someone with specific information. Maybe it’s answering a certain set of questions for someone who’s interested in your product. Whatever the case may be, as soon as you find yourself doing something more than once, do two things: 1) Create a process to get it done as efficiently and painlessly as possible, and 2) Document that process. Because as soon as you have a repetitive process that will help you get to where you’re going faster, it’s time to move to the next step…

Find other passionate people to help carry the burden. I do not care how small your town is, there is bound to be someone who believes in what you’re doing enough to help you with it, particularly if what you’re doing is to the betterment of the town you both live in. Find and connect with these people, and begin building something larger than you ever could’ve done on your own.

Be consistent and stick with it for the long haul. It’s important to find something you have the passion for, because trust me, there are going to be days you don’t want to keep going. But it’s like John Maxwell says, “Motivation is to get you going, but discipline is to get you growing.” There is very little that you can do consistently that will not begin to produce results at some point. Running a website like Sapulpa Times is a 7-days-a-week job, but I still do it faithfully, because I know that as long as we are continuing to push out content and provide value, we’ll continue to grow and do new, better things, and in turn impact our town that much more.