Music in the Park downtown in Webster City, Iowa, involved a lot of townspeople in the planning and playing, and lots of people showed up to listen. Photo by Deb Brown

Let’s look at the tale of two small town concerts.

Concert 1: We’ve done all the work, you just need to show up!

One happened at an agritourism business. They brought in a couple of professional musicians for performances out at the farm. The musicians were reasonably well known, with some previous exposure on TV shows you’ve heard of. But turnout wasn’t that great, and a friend of the owner pointed out the conundrum on Facebook:

People keep saying there’s nothing to do in this town, but then when we do put on something special, they don’t turn out.

I’m sure you’ve run into this, too. You work hard on events and things to do, then only a tiny crowd shows up. It’s frustrating!

Concert 2: Let’s build it together!

The second concert happened in a different town. A young man of about 25 named Mike walked into the chamber of commerce and talked with the director. He wanted to have more live music in town. Could she make that happen? No, she said, but he could. With some encouragement, Mike picked a night, then the chamber director helped him get permission to use the park. Then Mike went out and gathered his crowd. He found local musicians who would play in an open mic setting. He talked to all his friends. They spread the word, so more people heard about it. Then those other people spread the word, too. When the concert happened, lots of people showed up. Many people just listened, some played, and everyone had fun.

What’s different? The first concert is what I might call the television approach. It’s Old Way. It’s a few people in control creating a formal concert. They decide for everyone what concert will be, with an emphasis on big names (relatively speaking) and then if there isn’t a big crowd, it’s a failure.

This is how we do almost all of our events in small towns, isn’t it? We decide on a formal event. We have a few people on committees who are in control of making all the decisions. Then we announce the finished event to everyone. The role of everyone else not on the committee is to be the audience.

The second concert was more like a YouTube event. It’s the Idea Friendly Way. One person started with his goal, then informally involved lots of other people. It was probably chaotic. Their process was open and public. There was a crowd of people involved. In fact, they were creating the event together. The emphasis was on small participation by lots of people. If there was a small crowd, that was OK. If it was a big crowd, that was OK, too.

There was not “create the event then announce it.” It went the other way, “announce the event, then create it together.”

If you design the event then announce it, my only choice is attend or not. Probably not.

If you announce the idea and invite us to design it together, I can decide whether or not to attend, promote, invite others, contribute, join in, suggest a new idea, or create a whole new part of the event. And out of that list, I just might find a way to participate.

It will be chaotic. You won’t be in control. But you don’t do events because you need something to control. You do events to build community.

Can you still do events the Old Way, where you’re in control? Of course. But we have enough people doing things the Old Way. You’re different. It’s up to you to introduce how to do things the Idea Friendly Way.

Control isn’t the goal. Community is the goal.

Co-creating events with your community

Deb Brown and I share more details on how to do this in our latest video at SaveYour.Town, Events They’ll Attend.  The video is available for purchase until September 15, 2019, and can be watched anytime on demand for two weeks once you buy. 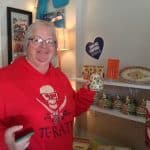