You knew that when I saw a session at SXSW on How to Be a Startup Outside of Silicon Valley, I would have to go! It was lead by Ross Kimbarovsky and Mike Samson, the founders of crowdSPRING based in Chicago. 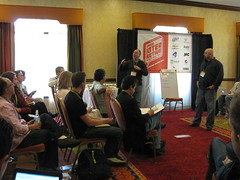 They presented five commonalities that startups share, as a framework for the conversation. Because it was a conversation, you’ll see comments and advice I caught from the audience and other participants, as well as quotes from Ross and Mike.

The Idea
Look for something that is a business, not just a technology.
The idea doesn’t matter. You’ll change the idea several times along the course of execution.
An Israeli entrepreneur in the audience said he went to an experienced entrepreneur as a mentor. The mentor said he couldn’t tell if their idea would succeed, and anyone who said they could tell was BS-ing them.
Look for the ideas that no one else thinks makes sense.
One of the challenges is finding the people who will give you that critical feedback.
Talk with people you’ve worked with before.
Go to people the idea would help and get their feedback.
Connect with other startups and tech companies in your area for insight into the challenges.
Just started talking to smart people.
Found like-minded people in co-working space.

Nuts and Bolts:
Do lots of prototypes, from whiteboarding through limited function betas. Find out what users will actually do, not what they say they would do. You don’t have to be in Silicon Valley to do a prototype.
Made a list of smart people who could advise them. These were also investors. They ultimately raised money from them.
If you’re planning on VC funding, incorporate. LLC works if you are not seeking VC.
They took a quick survey in the room. 80 to 90% of the startups in the room did not seek or get VC funding.
Most folks in the room were from metro areas, but outside the Silicon Valley. A few here had Silicon Valley experience.
Find your attorney long before you need them.
Most business colleges have structured programs to help entrepreneurs.
Connect with local startups beyond the big market leaders.
Use meetup, linkedin groups, etc., to connect with the local entrepreneur network.
Tel Aviv, Isreal has a founders club called Tech Aviv, with hundreds of local tech founders meeting once a month.

Execution:
This includes getting offices and workspace.
Co-working and incubators were mentioned by several.
One firm got retail space by making themselves a boutique inside an established retail location.
Mike said CrowdSPRING partnered with a design development firm, and the deal included a tiny amount of office space. This worked for them for nine months.
There is a big difference between working at home, and working with other people who have ideas, connections, networks, invitations to events.

Britt Raybould brought up another execution issue. You may have to cut a partner off. She started out with a person who was not equally committed to success. Don’t let the fear of having to replace them, make you keep them longer. There will always be someone else to partner with down the road.

When you start creating intellectual property, be sure you have the agreements in place to specify that you (the firm) own the IP.

Presence
Use social media. Use your network. Use your advisors’ networks. Be involved locally, regionally in the networks.
Go with some basic public relations, press attention.
Do some public speaking.
VC’s networks are excellent connectors. Ross said that crowdSPRING has been able to talk with most of the VC’s in the country, without being based in Silicon Valley.
HARO: Help a Report Out is a huge daily compendium of reporter story requests.Get your startup some press by responding to the right requests.

Ecosystem:
Ross said if you want to succeed as a startup outside the existing ecosystems in Silicon Valley, etc., then you have to invest in your local ecosystem. Ross is backing up his words by running a startup bootcamp in Chicago. They also did much smaller things, like buying a ping pong table so they could invite other startups to come play.
We talked about ecosystem throughout the entire conversation. No matter where you are, you can build a startup ecosystem.

Photo of Mike and Ross leading the conversation, by Becky McCray.