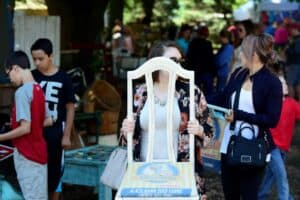 How one town got the city council to change the rules and enabled a great new event to bloom. Photo via Deb Brown.

When I was Chamber of Commerce Director in Webster City, Iowa, one of our big events was Junquefest, a three day event where vendors come to town and sell all kinds of junque.

We wanted to close the streets and let the vendors park their trailers by their booths. That was illegal, but we went before the city council and asked could we do that just for this event. The prior two years we held this event in the park and with no trailers allowed. We did have some vendors build a set up on site so it looked like a little store. Now we had an example of how they did it before and how having trailers onsite would make sense. The council said yes.

Our pilot was still officially against the rules, but by allowing this small step, the council got good information about how it could work if they did change the rules.

Get people on your side in advance

In another example, our Farmer’s Market is now downtown on a side street just off the main drag. They wanted to close the streets Saturdays from 7:30 to 11 a.m. Again, that’s against the rules. The Farmer’s Market people got their ducks in a row first, then went to the city to suspend the rules.

There are two businesses on the street they wanted to close. The farmer’s market people talked to the coffee shop people, and they thought it was a good idea. It was, too. More people buy coffee. The other place on the street is a hair salon that has clients to serve on Saturday mornings. The salon owner worked with another business that has a parking lot nearby to allow her clients to park there are Saturday morning.

Since both businesses involved had already agreed, it was easier for the council to say yes to a rule change.

How to do this in your town

Come up with a small pilot project as a test, before you ask for a big rule change. Then you have some evidence to take back to the council.

When you do your real-world test, be sure the council is invited. There’s nothing like the practical experience of being there to help them make a positive decision!

Go in advance and talk to anyone who will be affected by your plans. Don’t let them be surprised by a news story or a post on Facebook.

New video: Against the Rules

We’ve partnered with SaveYour.Town to bring you a video with 8+ practical ways to get your idea done no matter what the “rule enthusiasts” say. Learn more about it at: SaveYour.Town Against the Rules

Deb Brown comes from a farm outside of Geneva, Iowa, population 141. Her heart lies in sharing the possibilities for small towns. Deb travels a lot, taking back roads when possible, and talking to the locals, sharing stories of other small towns and encouraging anyone who will listen. She's the co-founder of www.saveyour.town and owner of Building Possibility.