This appeared in my newsletter for ministry leaders, “The Guy Down The Hall“. But Becky pointed out that the planes circle for small businesses, too, and I decided to share it here.

I grew up near O’Hare Airport. We could always see planes lined up across the sky, waiting to land. At busy times, we could see seven or eight clusters of light moving slowly toward the airport.

Some days, that’s what it feels like in leadership. Flights from many destinations (volunteers, vendors, kids, committee members, supervisors, spouses) are trying to land, carrying questions and challenges.

So what do you do at those moments (or on those days)?

I take notes. My capacity to remember is way less than when I was younger. But I’m guessing it wasn’t great then. I finally learned to carry a pen and a Field Notes notebook all the time, particularly on Sundays. As cool as electronics are, paper is reliable. And I never get distracted by a fitbit notification when I write in my notebook.

I take a deep breath. There are probably physiological benefits. For me, it’s a reminder that there is at least one thing I can control.

I take a walk. Sometimes I even ask the current questioner to walk with me. This is particularly true if the question is about setup or arrangements. I need to see where things are. I need people to be able to show me. But it also gives an excuse for silence in the conversations. When you are walking, taking time to think is excused. 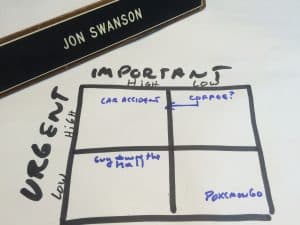 I take time for triage. When you come to the Emergency Room, there’s a desk. And the RN at the desk sorts out how quickly you get seen. It’s based on a mixture of Importance and Urgency. (You may not like the decision, but there’s a plan.)

Just because you are the elder chair doesn’t mean your question is urgent. Or even important. Though your daughter’s question isn’t urgent, it is important. The overflowing baptistry is both urgent and important (especially when there is a piano below it.) Checking Facebook is almost never urgent.

I take time to listen for Holy Spirit. It happened today. I was in a coaching conversation and I just stopped to listen. It probably looked like I was thinking. But the material I come up with isn’t that good.

What do you do when the planes are circling?