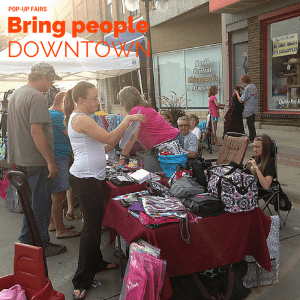 Help, our downtown is dead!

When I talk with people about their small towns, the most common thing I hear is that their downtown is dead. They don’t have many businesses, the few businesses aren’t open convenient hours, and no body goes downtown because there’s nothing going on. Or some variation on those themes. You’re not the only town that faces these challenges!

Deb Brown and I brainstormed on this. Was there one thing that could help any town, no matter how small or big? Could we come up with one specific action that would help whether the problem was a lack of businesses or a lack of activities or a lack of people, or all three? We think we have one.

Our Answer: the Pop-Up Fair

We came up with the Pop-Up Fair. Imagine your downtown sidewalks filled with mini pop-up stores selling all kinds of handmade, home grown and new and different merchandise. Picture a festival of regional businesses, artists, direct marketers, home-based businesses and others who have neat stuff to sell, creating pop-up temporary businesses right on your downtown sidewalks, just for one day. Imagine walking down the sidewalk in an evening, with these neat pop-ups on one side of you and local stores open late on the other side, and a crowd of people all talking, shopping and enjoying themselves. That’s a Pop-up Fair. 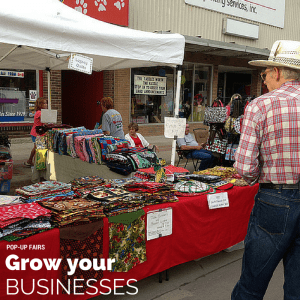 It will be a temporary change, as the pop-ups pack up at the end of the day, but a single project like this can kick off a wave of positive change. The local businesses who stayed open late have been given new ideas, and they’ve met new vendors that might partner on a more permanent display in their store. They’ve seen customers downtown spending money after hours, and they’ve made some money. The pop-up vendors have had a taste of running a downtown store. They’ve connected with other pop-up vendors, and they’ve seen ideas from other pop-ups. They’ve made some money, too, that will help them expand their business. Customers have seen more life and activity downtown than they’ve seen in a long time.

A temporary change like this can have lasting effects.

You’re welcome to use this idea in your town. In fact, we hope you do! But we know you’re busy. You have more than enough on your plate already. If someone would help you along, give you a bit of coaching and some reminders, you’d be much more likely to succeed. That’s why Deb and I came up with the mini course.

Get Our Support in the Mini Course

Each week, we’ll email you with specific steps for you to take, breaking it down into manageable chunks. We’ll talk you through the process, week by week for four weeks. When you have questions or feel stuck, you just hit reply. We’re both as close as your inbox.

But you can only sign up through Monday June 15, 2015, midnight CDT. That’s the deadline. We need to be able to support and coach those who do decide to join, so we have to cut off signups. If you’re interested, now is the time. 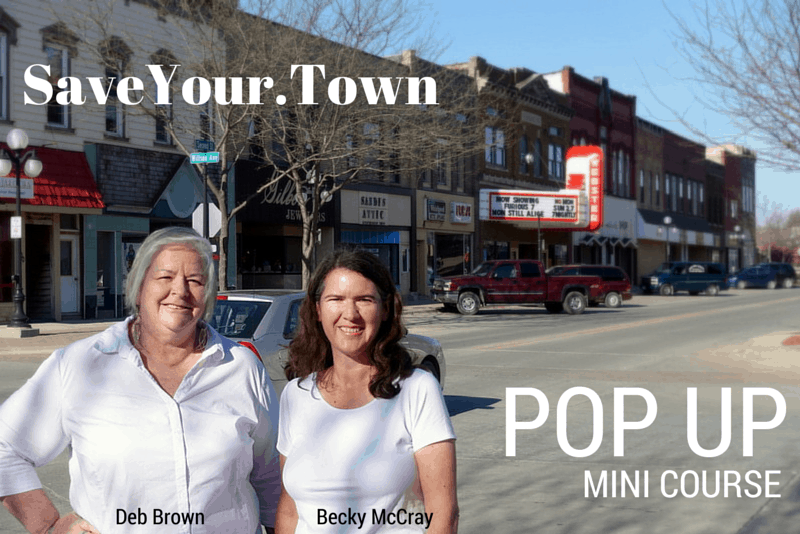 If you want to save your town, you have to take action.