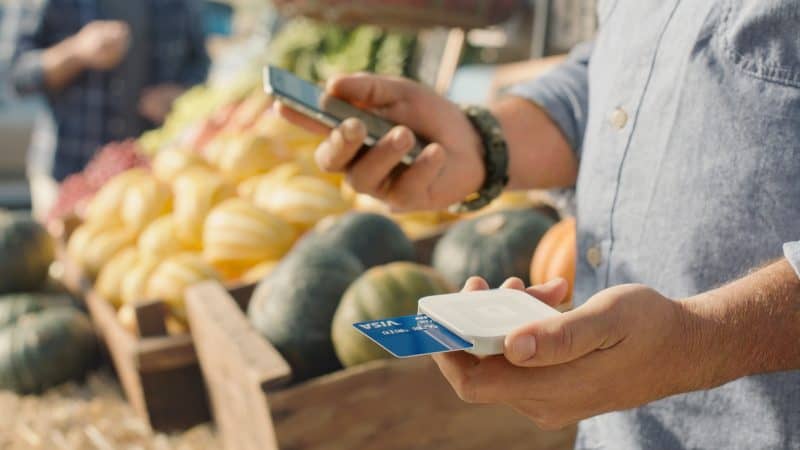 New EMV cards with chips have arrived in the US and even mobile systems can accept them. So why are small businesses still not switching? Photo courtesy of Square Media Resources.

Has your small business ever been dinged because of credit card fraud?  The smaller the business, the harder it is to shoulder the chargeback costs when a fraudulent transaction occurs.  Before October 2015, most of those charges were borne by credit card companies themselves rather than merchants who accepted counterfeit cards, knowingly or otherwise.

The United States has been behind the credit card times for more than a decade, clinging to magnetic-stripe cards while the rest of the world adopted EMV cards.  This is quickly changing, and if your business hasn’t made the shift, you are leaving yourself as unprotected as that magnetic strip.

Credit card fraud in the U.S. accounts for nearly 50% of the world’s card fraud, owed to the country’s continuing reliance on magnetic strips.  If your business hasn’t made the shift yet, now’s the time.  It’s easier than you might think.

Why EMV is Safer

Because of the static nature of magnetic stripe data, it is much easier for fraudsters to copy that data and then create counterfeit cards.  Last year, the U.S. lost $7.5 billion to fraud of this kind.  Fraud analytics is one of the greatest uses of data analysis in big business, for good reason.

Switching to EMV takes advantage of smart chip technology to protect both consumers and businesses.  Because each EMV transaction creates a unique identifier, it makes it more difficult for scammers to copy.

Consumers are thus less likely to lose data, and businesses, especially smaller ones, are less likely to be liable for those losses should they occur.  With the new standards, credit card fraud liability is distributed. It falls on you, the small business, if your customer uses an EMV-enabled card but you treat it like an old-fashioned magnetic stripe card.

If your small business has not yet made the transition to accepting EMV payments, it will be the party responsible for chargebacks.  While big business costs for the shift are expected to reach close to $9 billion, it will be significantly less for small businesses and be much easier.

Why EMV is Better for Customers

Most banks and credit card companies have already made the shift to EMV inevitable for consumers.  My mother, who happens to be a small business owner, panicked when her old credit card was declined because she’d already been issued a new chipped card.

Consumers with cards from forward-thinking banks and creditors now have no choice but to use EMV readers or near-field communication (NFC) such as Apple Pay.  While there are still strips on EMV cards, transactions done with EMV or NFC are faster and more secure.

I don’t have a chip card myself, but I’m more inclined to pay with my phone because of the extra security in my fingerprint.  Allowing me to do so, even at the farmer’s market, is going to keep me coming back to that seller.  The more payment options you accept, the more customers you’ll attract.  Being EMV-compliant is just another means of retaining customers.  There’s even potential for EMV cards to carry loyalty program information in the future.  If your small business doesn’t have one, now’s the time.

On the other side of the coin are businesses that have implemented new pay systems but have no proper training on how to use them, making the switch unsteady, to say the least.  Make the switch by researching how the cards are now read (the dip versus the swipe) and being sure to educate consumers who may also be unsure.

Why EMV is Better for Your Business

Of course, any time you attract more customers through more options, things get better for your business.  Some industry insiders argue that the cost of switching to EMV-compliant technology far outweighs the costs of fraud, this is not really the case for small merchants.

If your small business accepts mobile payments via a card reader or point-of-sale (POS) system such as Square, you were likely given a free reader as part of the sign-up.  Ordering an upgraded reader can cost $50 to $150, depending on your provider, and some of these include magnetic stripe readers in the bundle.  Spending less than $200 to upgrade a piece of equipment is a better investment than losing money from chargebacks and other kinds of fraud.

As it’s been nearly a year since the new cards starting shipping and the new regulations went into effect, your business may soon have no choice to upgrade to simply stay competitive.  Don’t let your small business be as behind the times on credit cards as the country has been.

Hattie is a writer and researcher from Boise, Idaho, with a varied background, including education and sports journalism. She is a former electronic content manager and analyst for a government agency, holds an MBA, enjoys local ciders, and tweeting via @hejames1008.