First rule: Don’t panic. You have probably done nothing wrong.

In the past 5 or so years, my clients have received about a dozen of those lovely letters from the IRS. There has been no change for any of them. 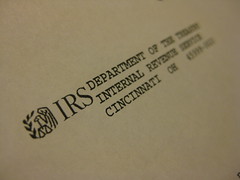 The IRS conducts many of what they call “letter audits.” These are merely requests for clarification of some entry on the tax return. In the case of self-employed individuals, the IRS is usually looking for evidence that some 1099-MISC has been included as reported in taxable income.

Next: “They can’t eat you.” This means, what the IRS wants is the money.

It is a long, long way from a letter announcing an audit to you being thrown into jail for tax evasion. To avoid jail, don’t EVER commit tax evasion. Report your income; report your expenses; pay your taxes. However, answer all correspondence from the IRS. Do not throw it away. Respond to the issues in any letter from the IRS.

Remember: You probably have not done anything wrong. The IRS just didn’t find it (whatever “it” is) in the place they expected to find it. Explain where you reported “it.” Tell the IRS where you put it or included it. Case closed.
If it comes down to a face-to-face situation (you and an IRS agent), big, big, big reminder. Listen–that is very important–listen to the question that is asked. Answer only the question that is asked. Volunteer nothing. If you have to go the the IRS office, take only the data requested in the IRS letter directing you to the IRS office.

Finally:You can ask for help.
If you can’t figure out what the IRS is asking for, or if you overlooked something, or if you flat made a mistake, or if you don’t feel comfortable dealing with the IRS on this close a basis, feel free to contact one of the many licensed return preparers–Enrolled Agents, Certified Public Accountants, attorneys, etc. These people are all comfortable in dealing with the IRS. The IRS does not scare them at all. They know and understand the rules of engagement. Plus whichever one of them you choose, that one is on your side.

Maesz is an Enrolled Agent.