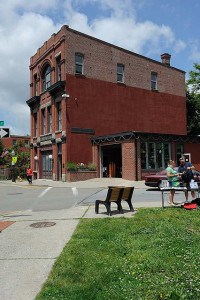 The story of the revitalization of three towns in New York’s Hudson Valley. Main Street, Beacon, NY. Photo (CC) by Ken on Flickr.

It happened to cities and towns throughout industrialized America in the late and middle years of the 20th century. Big employers who’d propped up local economies for decades downsized or left, creating a brutal ripple effect on smaller businesses. Three towns in the Hudson Valley of New York tell the story. In Rosendale, (population 1350) it was the cement industry. Beacon (population 14,000) lost factories. Hudson (population 6,700) was no longer a bustling port. A type of stability that people had built lives around vanished, and people were left struggling to make sense of a “new normal” of shuttered storefronts and tightened belts.

The big boys were never coming back to play; everyone knew that much. There was no miracle cure about to fall from the top down and save us all. If anyone was going to solve the problem, it would have to be us.

Fifteen years into a new century, while other towns and cities still struggle, a good sized handful have become Destinations. During the day, the west end of Rosendale’s Main Street buzzes with a steady flow of cheese shop regulars and visiting vintage thrifters, glittering and ringing with live music and laughter at night. Beacon has a world class-art museum, microbreweries, and artists’ lofts in its factories; its population grew 30% in the past decade. And Hudson is a hipster-transplant, antiques mecca with a theatre scene and nightlife that are hard to beat.

What happened, and how? The answers aren’t simple. There are a lot of moving parts, and there were more than a few false starts and things tried that almost worked. But common themes emerge that demonstrate just what makes these communities solid success stories.

Some factors that have played a role in the success of these particular communities are obvious. All three had an anchor of sorts—Beacon’s Dia Museum, Rosendale’s theatre and café, and Hudson’s avant-garde theatre scene coupled with the antiques sector, and now joined by an outpost of Etsy. Beacon and Hudson have train stations, and Rosendale is walkable from a regional bus stop. All three are beautifully located, with water and mountain views at hand. All three could be classified as what Salvino calls “rurban”—dense, walkable places with easy access to woods and open spaces.

Ann Citron is currently president of the Rosendale Theatre Collective. “When I moved here thirty years ago,” she recalls, “a movie cost two dollars.” Citron ran an arts space called Canaltown Alley that is now the Creative Co-op; she and her husband ran a bookstore for several years, during which he became a town board member and ultimately served a term as supervisor.

“My husband first got involved with town politics through our having a business on Main Street,” she says. “The people that are involved now, Jen and John and Chris and Jeanne and Bob, had all contributed so much to the community before they ever ran for office that it was a natural outgrowth for them to be the ones sitting at that table making decisions for the public good. We started a Main Street Association to help deal with things like sidewalks and traffic, and they assigned us a very responsive liason. They’re people you can sit down and talk to.”

Sheena Salvino has been executive director of the Hudson Development Corporation for four years. She relocated to the Hudson Valley from the Berkshires. “The community has a loud voice, and we strive to engage them with reciprocal feedback,” she says. “The Hudson Business Coalition operates a listserv with 200 members, including our elected officials, and there’s a constant flow of information about grants and what’s going on at the state and county level. And it helps that everyone around here has a really great attitude. They’re willing to enter into discussion even when they disagree.”

David Eberle relocated to Beacon from Greenwich Village in 2002, and has held various offices (including president) with the Beacon Sloop Club, of which he is now the communications director. He also handles media for Beacon’s Chamber of Commerce. “It matters when people are fundamentally interested in what government does and willing to organize if there’s something they don’t like,” he says. “At the municipal level, politicians have to listen to the people, and it keeps the relationships honest. Beacon has two very active parties and a lot of dialogue. We also have the Southern Dutchess Community Coalition, which was formed in the 1960s to promote dialogue between different races, and an active NAACP chapter. People can voice their concerns and have them addressed, and over time issues get resolved.”

Towns that succeed communicate not just often but intelligently. Elections and single issues, however divisive, are not taken personally or turned into long running grudges. During the 2011 race for Rosendale supervisor, supporters of both Democrat Jen Metzger and Republican Jeanne Walsh insisted that their candidate’s defeat would spell doom for the town, but no such rhetoric came from either of the candidates—an accomplished businesswoman and an environmental scientist who had already been working together for the town for years, as they continue to do.

“I am impressed with [the] council,” Hudson’s newly hired city manager, Jane Howington, told the Hudson Hub-Times in January. “They are willing to move forward and are very supportive, They are one voice with their priorities.” It seems logical to assume that this kind of collective will is the kind that solves problems – and magnetizes grant and investment funding.

Cutthroat capitalist competition doesn’t fly in our valley’s small towns, where anyone you’ve stabbed in the back on the way up is pretty certain to end up in line behind you at Stewart’s on the way down. Instead, coming together in and around the kinds of organizations mentioned above, business owners work to ensure that the rising tide lifts every boat in the fleet.

“People are working together,” says Citron.” We started Fourth Friday last year—businesses cooperate with one another, stay open late, offer discounts, have live music that night. Art galleries schedule openings around it. Members of the Theatre Collective get discounts at the restaurants. When you have community-minded people who don’t just think of themselves, it becomes symbiotic—it all works together. And Rosendale is small enough that we can feel the positive impact even from small efforts.”

Before the Dia Museum opened its doors, Beacon’s leaders were already taking steps to create a more business-friendly environment. “They had a plan, and one piece of it was to get rid of the first-floor residences on Main Street and make room for businesses,” says Eberle. “The Dia Museum was in progress at that point, not open yet. Then when artists came here and found out how much housing and work space their money could buy as opposed to farther south, businesses opened up in those spaces to serve their needs.”

That level of planning doesn’t stop when things begin looking up. Communities that thrive keep looking forward with their eyes wide open. “Several things will influence what comes next,” says Eberle. “One is what happens with the Incline Railway to the top of Mount Beacon. Two is the fate of the women’s prison that just closed. Third is what happens with the Hudson Valley trail system for bicycles and people.”

Attracting and keeping entrepreneurial energy is key, but so is picking and choosing development that’s a good fit. “Metro-North had a proposal for the waterfront that involved a lot of condos, and Beacon didn’t want it. It was too big. We need to come up with something people will like that will connect Main Street and the riverfront, but that wasn’t it.”

A major draw in all three cases has proven to be a blend of relative affordability and the arts. “The environmental groups, music, and art all played a role. The arts did more to transform the community than anything else,” says Eberle. “People come to Dia and fall in love with its surroundings. We have a music store and lessons for all ages, and concerts at the waterfront, and now we have the Towne Crier Café.”

Eberle interviews startup entrepreneurs for the Chamber’s newsletter, and says he’s constantly moved and fascinated. “I just did one on Beacon Vintage. It’s a love story. They got stuck in the train station when it flooded during Hurricane Irene and had to take cab all the way back to the city. But they fell in love with Beacon and they’ve each opened their own business here. It happens over and over.”

In Hudson, the Armory is being renovated on a 99-year lease as a senior center and public library. In Rosendale, the theatre plans to add a flea market to the farmers’ market in its backyard every Sunday. In Beacon, there is talk of finding good housing for the Shakespeare on the Hudson company. And in all three towns, there’s a feeling that with any luck, the good times are back to stay.