People from all over the world, from a huge variety of industries, came together in New York with only a common language and common tool: Twitter. That’s bizarre. But that’s the 140 Characters Conference, created by Jeff Pulver (@jeffpulver). 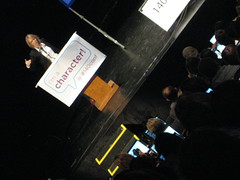 Aliza Sherman did a terrific job of capturing a flavor of the conference in her summary post at Web Worker Daily, The 140 Character Conference, or Why Twitter Matters Now. Jonny Goldstein made some wonderful visual notes from sessions, too.I’m adding some of my notes made during sessions, and a few reactions from the Twitter stream.

Tim O’Reilly (@timoreilly) – Founder and CEO, O’Reilly Media
What twitter has taught me

Marcel LeBrun (@lebrun) – CEO, Radian6
The effects of twitter on My Business, or how things are different now because of twitter. The corporate perspective.

Tony Hsieh (@zappos) – CEO, Zappos.com
The effects of twitter on My Business, or how things are different now because of twitter. The corporate perspective.

Jeremy Epstein (@jer979) – Marketing Navigator, Never Stop Marketing
How I followed Jeff Pulver on Twitter for 16 Months and Ended Up on This Stage: Twitter as a Strategic Relationship Building Tool

Chris Brogan (@chrisbrogan) – President, New Marking Labs
Julien Smith (@julien)
Twitter and Trust Agents
Jeff Pulver introduced Chris, saying not enough people know who he is, even though he is one of the best known people in the Twitter community. Jeff is dead serious about reaching outside the closed community.

I gave Aaron Strout the award for Best Moderator at the conference for this panel. He asked questions, shaped the discussion, gave his panelists a chance to shine, and didn’t try to overwhelm them.

What? You still want more? Aaron Strout did some live blogging at 140 Character Conference, and he caught some panels I missed.